Each spring, the University of Tennessee’s Partners in Sports organization hosts a reception where scholarships are awarded to student members and a guest speaker shares advice for aspiring sport managers.

This year, there were two guest speakers, 2016 Tennessee Sports Hall of Fame Inductee Missy Kane and 2004 Olympic Pole Vault Gold Medalist Tim Mack. Both shared a bit of their journey to become a collegiate athlete including the journey of hardships, determination and mentors who kept encouraging the process.

Missy Kane is a UT graduate of the sport management program where she is a former Lady Vol runner who went on to qualify for the 1984 Olympic Games in the 1,500 meters. She won a bronze medal in the 1,500 meters at the 1983 Pan American Games. Kane is now a health promotions coordinator for Covenant Health.

Tim Mack attended Malone College and transferred to the University of Tennessee where he earned bachelor’s and master’s degrees. He is an olympic pole vault gold medalist and record holder. Mack is now a pole vault coach and trainer.

“It was great to come back and see some of my old teachers and some of my old role models,” Mack said, “hopefully I can be one of those to these guys and girls.” His advice to the students pursuing jobs and careers in sports is to have determination and relentless will.

I had the privilege of presenting the coveted Buck Jones Service Award to two recipients, Jackson Martin and Sam Gilliam. 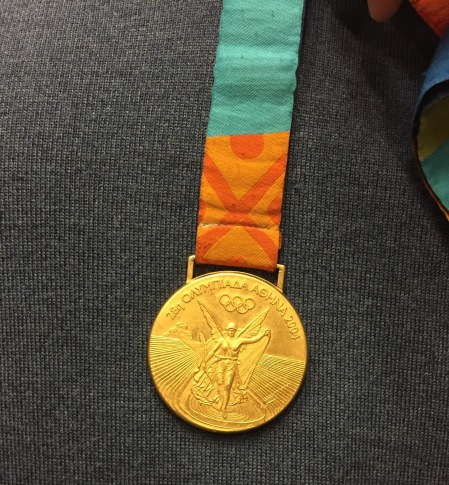